So putting together everything I learned in college during the last one year of inactivity, here's a write-up with a little more technical content. Here's how the engine works:


Now as we all know, the engine is the heart of the bike. Although by function it's actually the mouth, stomach, mitochondria, neuron and the rectum of the bike as well but let's dwell further into that analogy. Now the engine is divided into 3 parts: 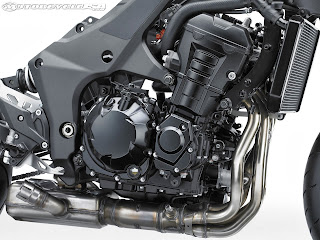 The cylinder head contains the spark plug, valves and is attached to the manifolds. There are seperate valves and manifolds for the intake and exhaust funtions. 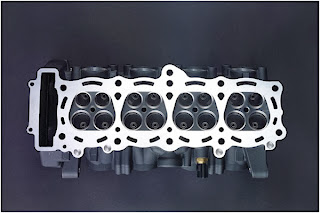 The valve in layman terms is a spring actuated, one sided - mini barbell ( I am sorry there I couldn't find another way to describe that shape). The valve on it's own can't be of any use and so a camshaft is provided to actuate it. The camshaft is a cylinderical rod that has oblique protrusions palced along the length of the length of the rod in such a manner that they push against the flat end of the valve and allow space for the air-fuel mixture to move in or the exhaust gases to move out of the chamber. Once the camshaft is set into rotation, it perodically pushes the valves inwards when the oblique ends are in contact with the flat portion of the valves and once the oblique ends cease to make contact, the spring actuated mechanism pushes the valves back to the original position. The timing of the camshaft and the opening of the valves is synced with a rather complex timing mechanism which would require an M-Tech degree for proper comprehension so I can't explain it as of now. Here's an animation of valves in action-

Pushrod engines have a slightly different mechanism. They consist of a seperate rod which when pushed by the camshaft actuate the movement of the valves via a set of rocker arms. They are commonly used in Twin Cylinder engines and were made famous through American Cruisers. 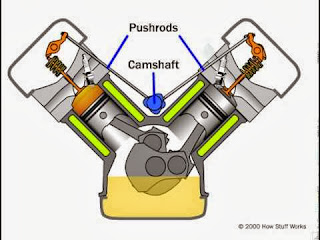 In order to increase the performance, you can increase the number of valves such that more air-fuel mixture flows into the combustion chamber. You can install race-cams or high lift cams (high lift because they push the valves to a higher off-seat position compared to normal cams) which again perform the same function of allowing more fuel mixture into the chamber.

DESMODROMIC VALVES (©Ducati): Lo Amo Italiani ( I love Italians)! These guys incorporate such wacky and unconventional ideas which are in some way or the other miles ahead of the traditional methods. The Desmodromic Valve system is one of them. Although it wasn't really developed by Ducati but they made and patented the most efficient and error-free version of this system. Now for traditional engines economy oriented engines, the standard spring actuated valve was more than adequate. However for a high performance engine the springs would suffer from stress induced fatique very quickly under high RPM's and so the Desmo system was developed to tackle this problem. A desmodromic valve system doesn't have any springs but is controlled by a set of metallic actuators that pull or push the valve ends depending on the position of the camshaft. No springs = No problems! 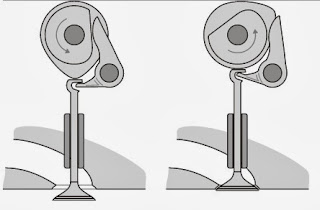 The engine block is home to the combustion chamber and the piston. The piston is a cylinderical block which may be made of aluminium, cast steel or many other individual metals and alloys. The piston reciprocates in up and down motion within the the space that it's provided with for movement. There are two terminal positions it can occupy within the block, one is TDC ( Top Dead Centre, uppemost position) and the other is BDC (Bottom Dead Centre, lowermost position). The piston is responsible for generating all of the usable power necessary for turning the wheels. The movement of the piston from one dead centre to the other is known as the stroke. A four stroke completes one cycle of intake, power generation and exhaust in 4 strokes while a two stroke engine does so in as you guessed it, 2 strokes. Let's have a look at the 4 stroke engine cycle first:

Stroke 1: Intake
The air fuel mixture is sprayed into the the combustion chamber using a fuel injector or a carburetor. The intake valves are open while the exhaust valve are closed. The piston will move from TDC to BDC position

Stroke 2: Compression.
Both valves are closed and the piston moves from BDC to TDC, thereyby compressing the air fuel mixture to high pressure as they have no escape route.

Stroke 3: Combustion
Both valves are still closed and the spark plug gives out a tiny spark which is sufficient enough to ignite the super compressed air fuel mixture. As the mixture catches fire and undergoes rapid expansion. Again as there is no route for the expanded gases to escape, the force of the gases pushes the piston down from TDC to BDC. This stroke generates most of the usable power.

Stroke 4: Exhaust
The exhaust valves open up. Now since the piston was pushed down with a large amount of force, the momentum it gained pushes it up again from BDC to TDC and the remaning unburnt gases are pushed out of the exhaust valve. 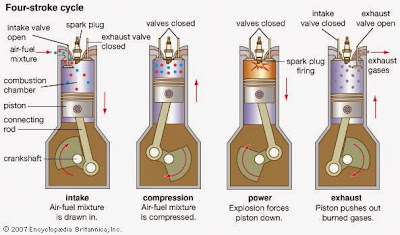 In a two stroke engine, usable power is generated in just two strokes and it does not contain valves, just cavities known as ports which are closed and opened by the movement of the piston itself. The cycle of the two stroke engine starts from BDC just like the 4 stroke engine. The Inlet port is open and the air-fuel mixture is filled up in the lower part of the cylinder block. As the piston moves down to TDC, it pushes the mixture into a chamber called the transfer port which leads to the upper part of the block. The piston then moves up to compress and ignite the mixture thereby producing power. When the air-fuel mixture travels through the transfer port, it pushes the exhaust gases out as it is uncovered by the piston. The process is commonly referred to as scavenging. Now compared to a 4 stroke engine, a 2 stroke engine develops much more power for the same engine capacity (theoretically twice the amount but realistically about 1.4 times), however the absence of valves and the process of scavenging are highly inefficent which leads to higher pollution and fuel consumption. But hey nothing can compare to the intoxicating whack of power and the stubby exhaust note of a 2-stroke (PURELY IMO).

Onward to the last part but equally important part of the engine, the oil pan. The oil pan is an large and mostly flat cavity which holds all the engine oil required for lubrication. For any metallic parts moving in high speed, friction will always be a b*#ch and that is why you need lubrication. The engine oil is sprayed at the piston so that it slides against the walls of the combustion chamber sans any friction and various other parts like the crankshaft and cam bearings. This is done through a pump located in the upper section of the oil pan. The oil is passed through a filter first before being sprayed to remove any grit or physical impurities. The remaining oil that trickles down is collected in the sump again and the process is repeated. In a traditional system or wet sump system, the oil pan acts as the oil sump as well.

Dry Sump System: Unlike a conventional wet sump, the dry sump system consists of a seperate reservoir to store most of the engine oil. It consists of two pumps, one to transfer oil from the sump to the tank and the other to spray the transferred oil to the parts of the engine. There is a minimal amount of oil present in the oil pan below the crankshaft. In a wet sump system, all the oil is stored within the oil pan. So during acceleration, braking or cornering, the oil will splash around within the engine compartment leading to over-lubrication of engine parts. This affects the performance. Also since a Dry Sump doesn't need the oil pan to store the engine oil, the main components of the engine can be placed lower leading to better mass centralisation and a lower centre of gravity. Nevertheless the dry sump system is complex to maintain, more expensive and heavier than the conventional system. However considering the benefits, one can make some sacrifices considering cost and complexity. 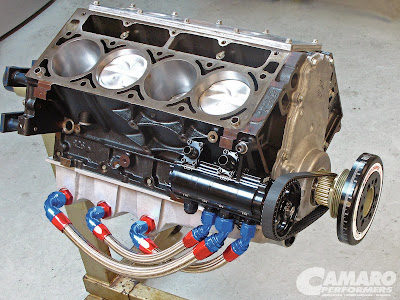 The dry sump system. The black tank is the seperate sump
which is connected to the oil pan via metallic tubes.


So that's it guys! A complete walkthrough of the engine. Now I have only completed my first semester in B.Tech so my knowledge may be wrong at certain places. Feel free to correct and do leave your queries in the comments section!